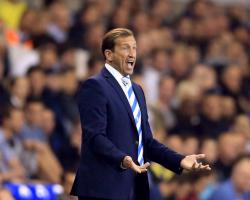 The Cobblers knocked out Liverpool on penalties in the third round at Anfield seven years ago and repeated the feat against West Brom in round two last season before losing to eventual winners Manchester United.

"We'll go there to impose ourselves and try and put our own style of play on the game, to try and cause an upset and get through to the next round," Cobblers boss Justin Edinburgh told the Sky Bet League One club's official website.

"We know what lies ahead

If we can get a good victory in this round and cause an upset then we could get a big draw.

"We can't look beyond QPR, who had a fantastic result on Saturday at home, but we certainly go there looking to cause an upset."

A total of 29 first-round ties take place on Tuesday night and another five 24 hours later as English football's second biggest knockout tournament gets under way for the first time since being rebranded under new sponsors.

Edinburgh's former club Gillingham travel to Reading confident of springing another surprise after dumping Watford out of the competition last season.

Accrington sent Premier League side Burnley packing in the second round last year and will fancy their chances again when Preston visit.

Forest Green's first foray in the tournament following promotion to the Football League in May will be against MK Dons, while National League champions Lincoln travel to Rotherham for their first fixture in the competition in six years.

Luton, who knocked out Aston Villa in the first round last season, could make life difficult for Ipswich at Kenilworth Road after thrashing Yeovil 8-2 there on Saturday.

Bristol City can expect a bumper crowd for the visit of Plymouth, while Championship trio Sheffield Wednesday, Norwich and Wolves all have home advantage against Chesterfield, Swindon and Yeovil respectively.

Harry Redknapp's Birmingham, who fell at the first hurdle at St Andrew's against Oxford last season, take on League Two side Crawley at home and Wimbledon face London rivals Brentford at Kingsmeadow.

Cardiff and Portsmouth will both be buoyed by opening-day league wins when they clash in the Welsh capital and League One north-west rivals Wigan and Blackpool meet at the DW Stadium in another eye-catching first-round tie.